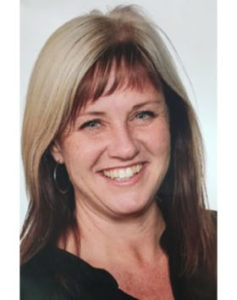 Kim Manton passed away at her home in Victoria, BC on June 26, 2020 at the age of 51 with family by her side. Her 2-year journey with Ovarian Clear cell carcinoma was met with strength and grace.

Kim grew up in Port Alberni BC.  As a young woman, she spent a year in Zurich, Switzerland as a nanny before returning to Victoria, where she went on to graduate with a degree in Sociology at the University of Victoria. Kim’s innate need for social justice was met early in her professional career when she became a job steward for Cupe Local 1978 while working as a Park Attendant for the C.R.D., and later as coordinator for the “Keep it Public” campaign. Her union work was carried through as “ Labour Coordinator” for the United Way and then as “Development Officer” for the faculty of education at the University of Victoria. Her dream jobs, first as “EA to the Honourable Carole James, Minister of Finance and Deputy Premier” and then as “Caucus Outreach Manager” for the NDP at the BC Legislature were the culmination of all her hard work. Her work as a well known and respected labour and political activist including Cupe Local 50, the Victoria Labour Council, the B.C. Federation of Labour and the NDP came from a passion for what she truly believed.

Kim also enjoyed some travel adventures and her garden where she could plant her flowers and enjoy a glass of wine and play with her beloved fur babies. The hundreds of messages and tributes that she received on social media in her final days filled her with many happy tears. She told us how pleased she was to be honoured for her work.

We would like to thank her friends, doctors and nurses that made this journey with her, with special mention to Dr Downs and Dr Michel.

As per her wishes, a donation to the blood bank or to Broken Promises Rescue in Victoria may be made in her memory and of course, a random act of kindness will have her sending you jazz hands and a WOOT WOOT. She will be missed!

A funeral will be held at a later date.