A Message to Our Labour Movement Sisters and Brothers 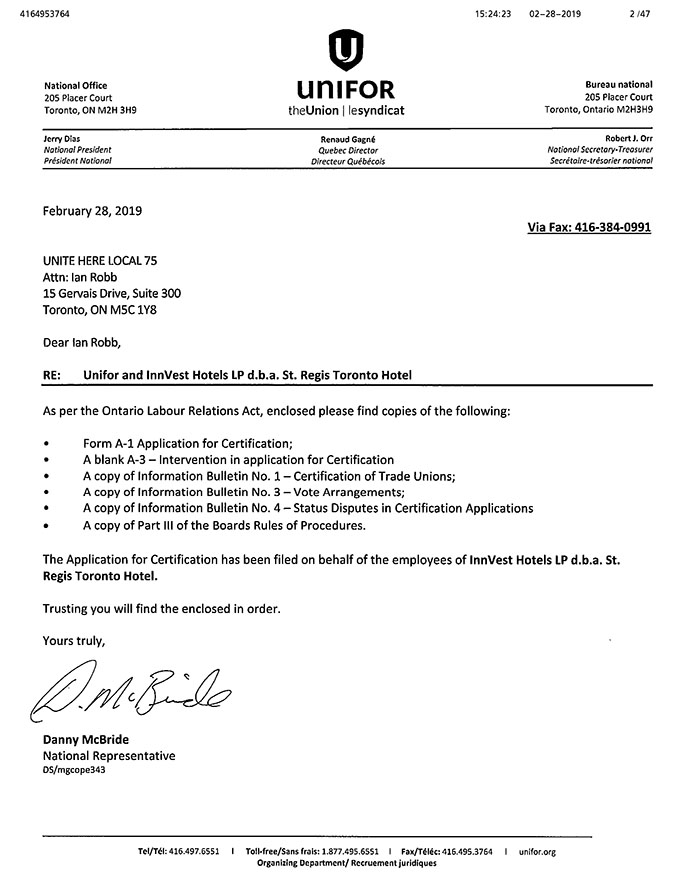 A Message to Our Labour Movement Sisters and Brothers

Unifor continues its raiding against our union in Toronto. On February 28, 2019 Unifor’s National Office submitted an application to raid our membership at Marriott’s St. Regis Toronto. This is merely the latest development in Unifor’s 14-month raiding effort.

Despite the millions of dollars Unifor has spent, that effort has failed. UNITE HERE Local 75 members have successfully fought off Unifor’s campaign to undermine our local, sending a decisive message at 45 hotels by choosing to remain with our union. Instead of allowing us to focus fully on winning industry-leading contracts and empowering workers across our sector, Unifor continues in their attempt to divide our union. Despite Unifor’s efforts, our negotiating committees continue to secure historic contracts, raising the bar for hospitality workers across the GTA with unprecedented wage increases, health benefits, and protections.

Hotel workers have spoken and Unifor Canada must seriously consider the implications of wasting more workers’ dues to wage this attack on our union. As GM threatens thousands of jobs in Oshawa and Ontario’s provincial government attacks workers’ rights, our labour movement is at a critical juncture. Unions everywhere must work together to fight corporate greed and austerity measures, not waste resources attacking other unions. We stand in solidarity with the rank and file members of Unifor mobilizing against General Motors’ corporate greed in Oshawa. Unifor’s leadership must prioritize these workers instead of sending Unifor staff to raid our union.

UNITE HERE Local 75 members have won significant improvements in the last year as part of the strongest hotel workers union in North America. Last year alone UNITE HERE took on Marriott, the largest hotel company in the world, and won historic contracts through strikes at 23 hotels. We believe that our labour movement is strongest when unions stand united in building the power of working people. We insist that Unifor end the raids and recommit to our shared struggle. It’s time for all unions to work together as we build a better future for workers in the Toronto region and beyond.